This beautiful young stallion attracted a lot of attention at the 2019 Oldenburg Stallion Days. Equipped with outstanding basic gaits, unbeatable mechanics and a lot of elasticity, he has continually impressed everyone from the very beginning. His charisma and his high quality delighted the audience and the jury, earning him the title of “1d premium stallion" by the licensing commission.

Breeding director Dr. Wolfgang Schulze-Schleppinghoff: “This Morricone I son impressed us especially with his striking mechanics - he trots very nicely out of his knee. This stallion is very balanced in the quality of his basic gaits. His walk, trot and canter thrilled us equally. He is a powerful horse, perfect for the dressage sport.”

Gerd Sosath was very pleased that he was able to aquire this premium stallion: “I had an eye on this beautiful youngster for three days and fell for him. He has three incredible basic gaits and was well-behaved on all days he was being observed. I was sure that he would be a perfect match for our stallion station and our broodmares. I was very happy when I was able to buy him at the auction. After the auction, many breeders came and congratulated me on buying this promising youngster.”

In 2020, Moreno made his tournament debut in Höven - and it couldn't have been better. He showed himself very confident and won the riding horse class with the final score of 8.8. For the trot and canter as well as the training and the conformation he received the dream mark of 9.0.

Shortly after, he was awarded as Oldenburg Vice Champion of the 3-year-old stallions and nominated for the Bundeschampionat. There, he ranked 4th in the qualification and 5th in the Big Final. Ridden by Veronika Steinhof, he got the total score of 8.7 and reached the following marks in detail: walk 9.0, trot 8.0, canter 8.5, level of education 8.5 and conformation 9.5. He was the best 3-year-odl Oldenburg stallion.

Only a few days later, he started his 14-days-test and passed it sucessfully with a dressage score of 8.58.

In 2021 and 2022, Moreno successfully completed his sport tests in Münster-Handorf. This year, under Madita Rentz, Moreno has already won and placed highly several times in elementary class dressage tests for young horses and qualified for the Bundeschampionat.

Sire Morricone was Champion Stallion of the Oldenburg licensing in 2014. In 2016 he became the outstanding dressage winner of his 30-day test with a final score of 9. 33. Altogether he received four times the maximum score of 10.0. Due to his own performance and his first offspring he was awarded as the main premium winner. Morricone is now successful in dressage classes on S*-level with Lena Waldmann. In Verden he was runner-up in the qualification for the final of the Nuremberg Burgpokal. His offspring impress with excellent basic gaits, strong nerves and charisma.

Dam sire San Amour was runner-up of the Oldenburg licensing 2006 and high-priced stallion at the auction. In 2008 he became main premium winner and finished his stallion performance test as dressage winner. In 2009 he placed in the final of the Bundeschampionat. San Amour's offspring are becoming more and more popular in the international sport. Among the most successful offspring are West Side Story (Estelle Wettstein, SUI, World Championships Tryon 2018), Sinclair Jason (Christian Schumach, AUT), Sun Of May Life (Regina Isachkina, RUS) and Sandro d'Amour (Olga Safronova, BLR), who have all won and placed up to Grand Prix level. Saphira Royal and Stefanie Wolf won the bronze medal at the World Championship for Young Dressage Horses in 2016 and were placed at the top of the Bundeschampionat every year from 2012 to 2015. Soiree d'Amour OLD and Kira Wulferding won the Bundeschampionat, placed at the 2014 World Dressage Championships and participated in the Burgpokal Final. Full sister Soiree de Saumur won bronze at the Bundeschampionat in 2013. Other successful offspring by San Amour at championships include are for example the Vice World Champion of young dressage horse Samoura M and the Vice Bundeschampion Stern von Afrika OLD. Ann-Kathrin Lindner won with Sunfire Team-Gold at the European Championship U25.

So far, he produced 48 licensed stallions, including winning and premium stallions as well as numerous premium mares, such as B. the Oldenburg Champion Mare Calamity Jane.

Moreno wins at his first show in Höven with 8.8. 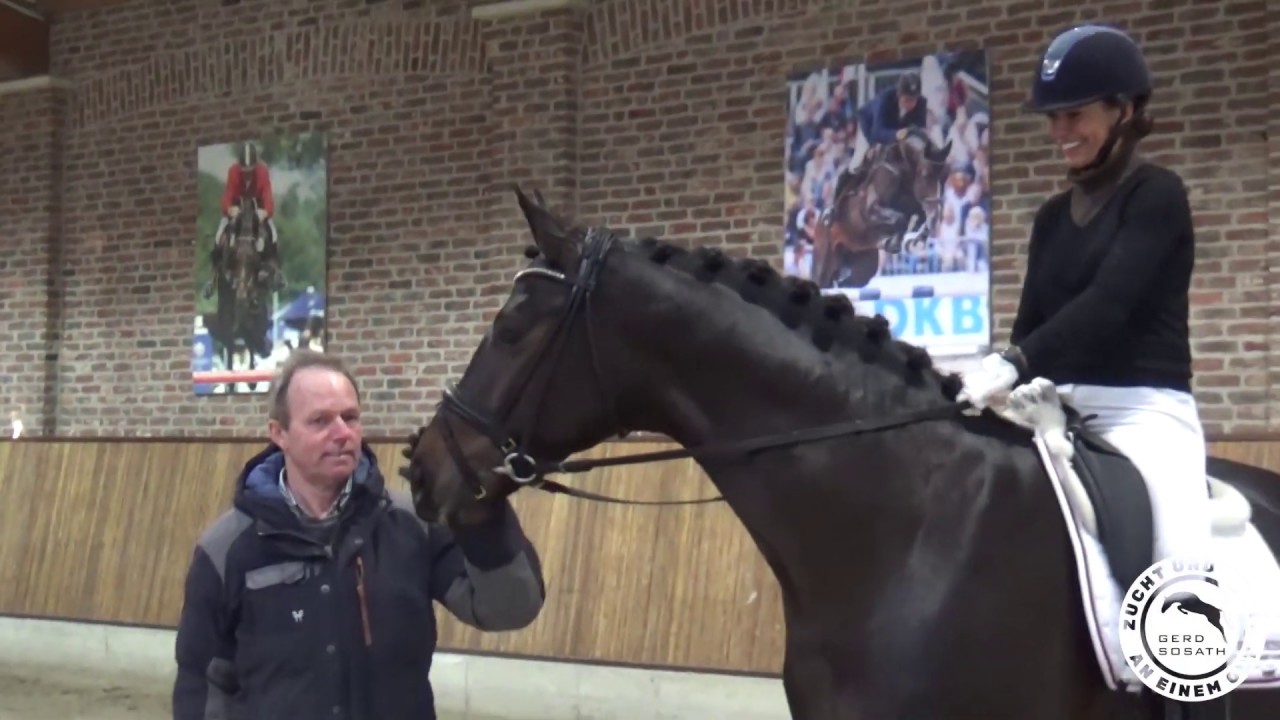 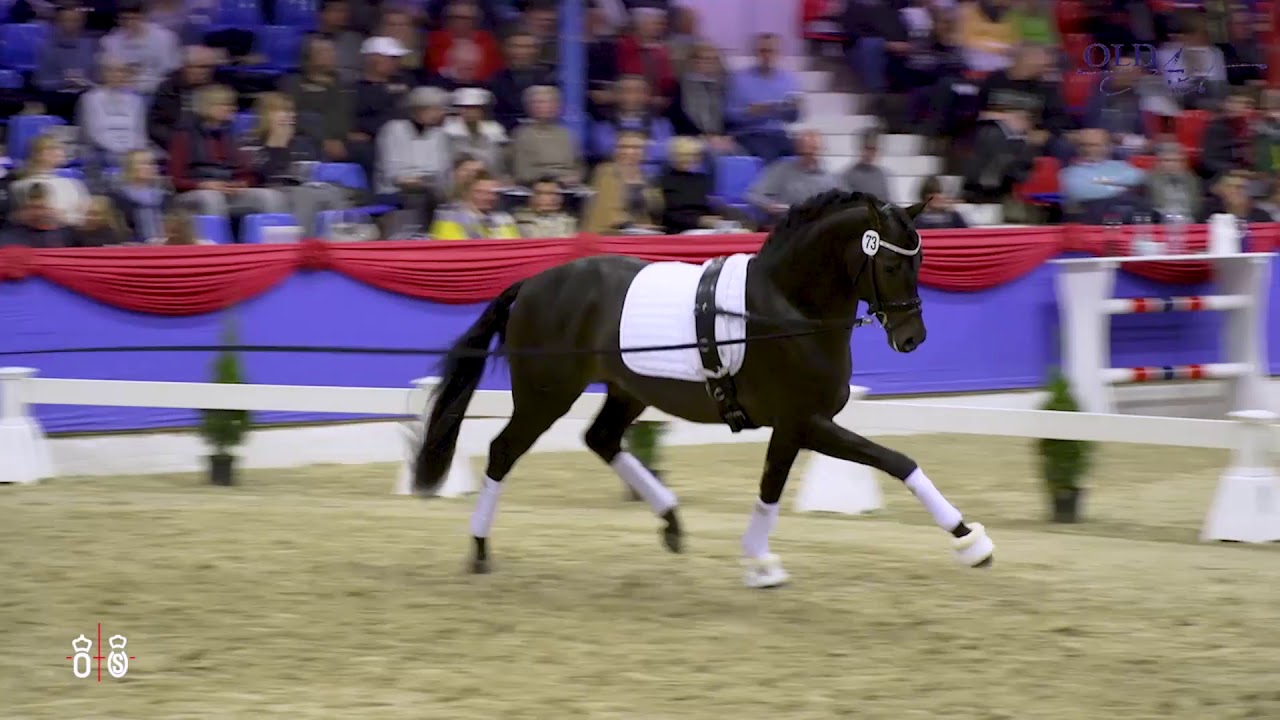 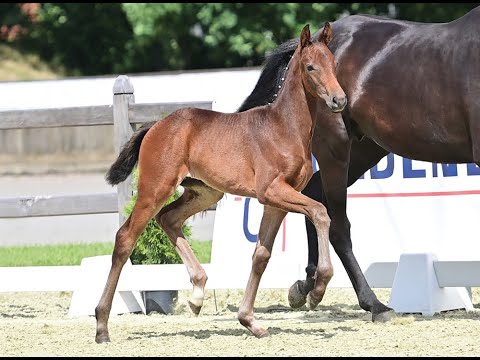 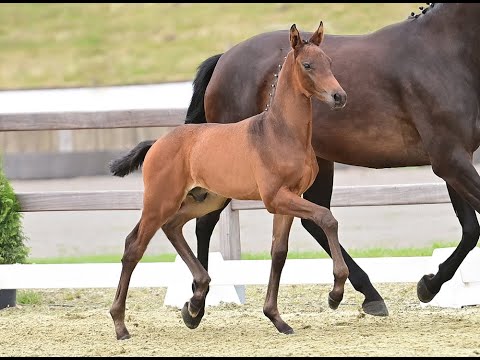 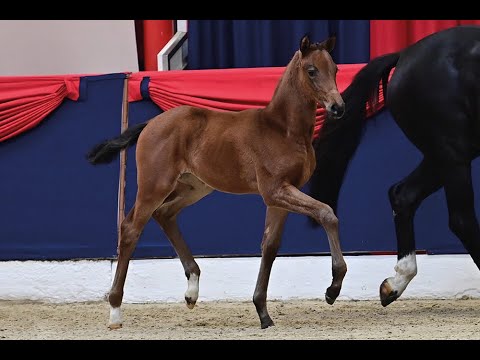 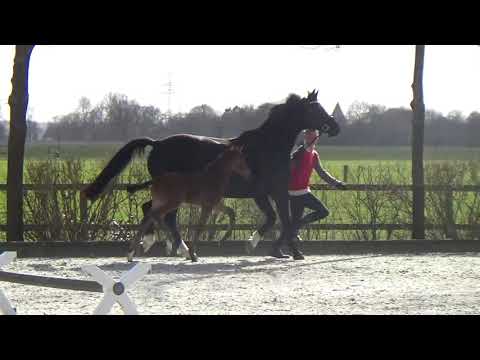 "Very sporty, handsome, with tremendous drive and dynamic", just a few attributes describing the outstanding offspring of the young stallion. 15 foals were shown, all received an award, five were selected as elite foals and three were invited to the auction.

No. 67, the filly by Moreno out of Fürst Natalie by Fürst Romancier x Natiello xx bred by Gerold Sparke, Hude-Hurrel, was crowned Champion Foal. Reserve Champion became the filly no. 68 by Moreno out of Theadiva by Stedinger x Rolls Royce, bred by Klaus Peters from Nordenham. Third place went to no. 61, a colt by Moreno out of Musicara by Balesteros x Quattro B bred by Dirk Struss, Westerstede.