He won the youngster class (1.10m) with a score of 8.6 at his very first show in 2017. The young stallion impresses with his great attitude, rideability and scope.

In the Big Final of the World Breeding Championships for 5-year-old horses, he ended up on a fantastic 12th position as the best German stallion.

Comme Prévu also won the Main Premium Prize of the Oldenburg Jumping Association for his fantastic first crop of foals and his own outstanding performances.

Comme Prévu won a 1.30m class at his first show in 2019. During the show season, he was also placed in several classes up to 1.35m and qualified for the Bundeschampionat for 6-year-old jumpers.

2020 he placed in international youngster classes for example at the CSI in Kronenberg.

Comme Prévu's sire Comme il faut won the World Cup show jumping in Madrid with Marcus Ehning, the Grand Prix of Vienna (1.60m) and the Grand Prix of Paderborn (1.50m) in 2016. He placed several times at international shows (Oslo 1.60m 4th place; Helsinki Grand Prix 1.60m 6th place; World Cup qualification London 1.60m 9th place). In 2015, he finished second in the Nations Cup and third in 1.60m classes twice (Rome, Rotterdam). In 2018, he won the Grand Prix of Brussels (S*****) as well as the GCL stage of Chantilly (S*****) and belonged to the German championship squad. He also received the suffix "NRW". In 2018 he produced the Bundeschampion of the 5-year-old show jumpers Chao Lee and the Reverse Bundeschampion of the 6-year-old Daddy's Destiny.

Comme il faut's sire, Cornet Obolenksy (Marco Kutscher/GER), won Grand Prixs and Nations Cups and is one of the most successful sires of our time.

Comme il faut's dam Ratina Z was one of Ludger Beerbaum's successful horses. Together, they were named Team Olympia winners in 1996, team world champion in 1994, double European champions in 1997 and winners of the World Cup final 1993 and the Grand Prix of Achen 1996. After her athletic career, Ratina Z also brought the licensed, in 1.60m jumpings successful stallion Crown Z by Carthago, as well as the licensed Rex Z (by Rebel I Z) and Treasure Z (by Dollar de la Pierre), both succesful in 1.50m shows.

Ratina Z's dam Heureka Z (Hermann Schridde) was the world's most successful jumping mare of her time and established a new show jumper's dynasty in Zangersheide.

Dam sire Quinta Real was premium stallion of his licensing. He descends, like our foundation sire Casiro, from the Holstein dam line 318 D1. With its former World Champions and European Champions second Cumano (Jos Lansink/BEL) and Derby winner Boy (Eddi Macken/IRL), this dam line is one of the most prosperous of the Holstein breeding. Quinta Real sired the licensed Quintador (out of Laskaja by Landor S), that won international 1.55m shows with Greta Matienzo, the eventing horse Quinta Essentia (Vanessa Bölting, winner CIC**) and further internationally successful show jumpers.

Comme Prévu descends from the Westphalian dam line 392, that also brought the internationally (1.45m) successful Lausbub by Lauterbach (by Landor S), as well as the 1.50m successful Coralie by Cornet Obolenksy (Siebe Kramer/NED). Portofino 19 (dressage) by Portofino, Amsel 64 (1.40m) by Aar and Gracioso 8 (international dressage) by Grundstein I are further sport horses from this dame line. Licensed stallions of this family are a’Lee Spring Power by Argentinus, Gralserbe Ldb. by Gralshüter, Grannox Pb. by Grannus, Prosario Ldb. by Pinocchio and Zeppelin Ldb by Zeus. 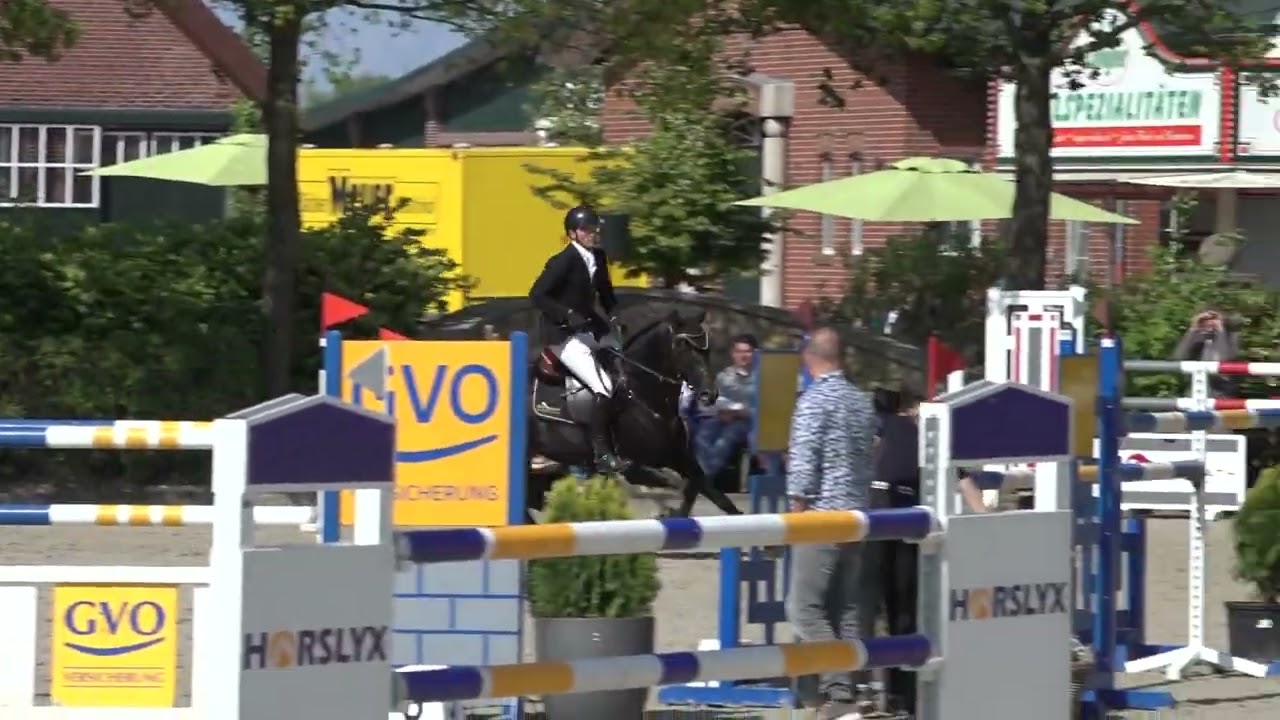 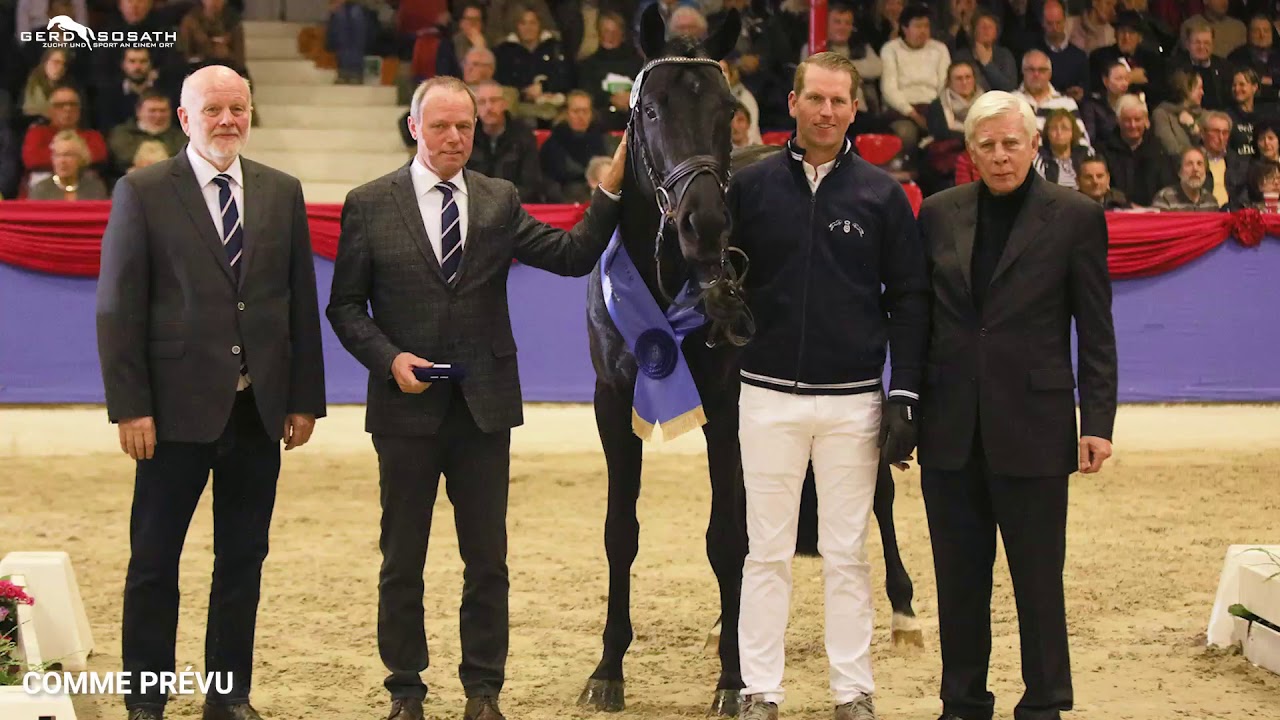 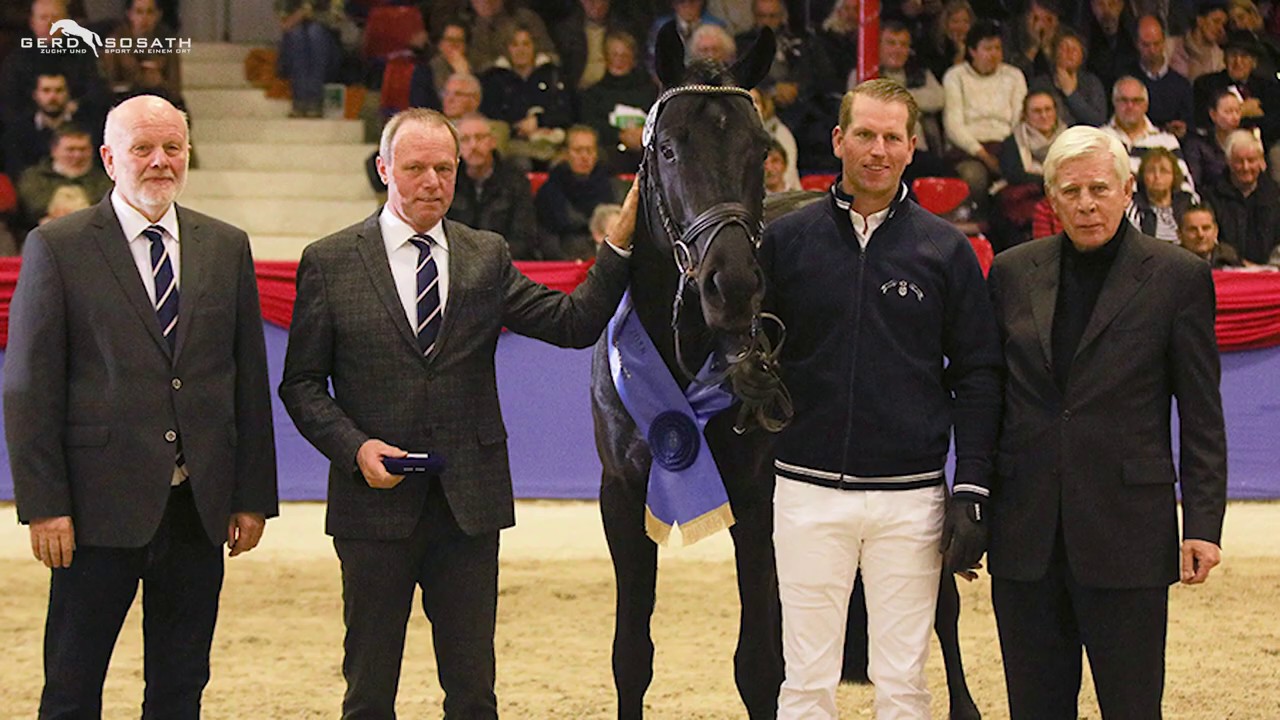 Final of the FEI World Breeding Jumping Championships for 5-year-olds in Lanaken 2018. 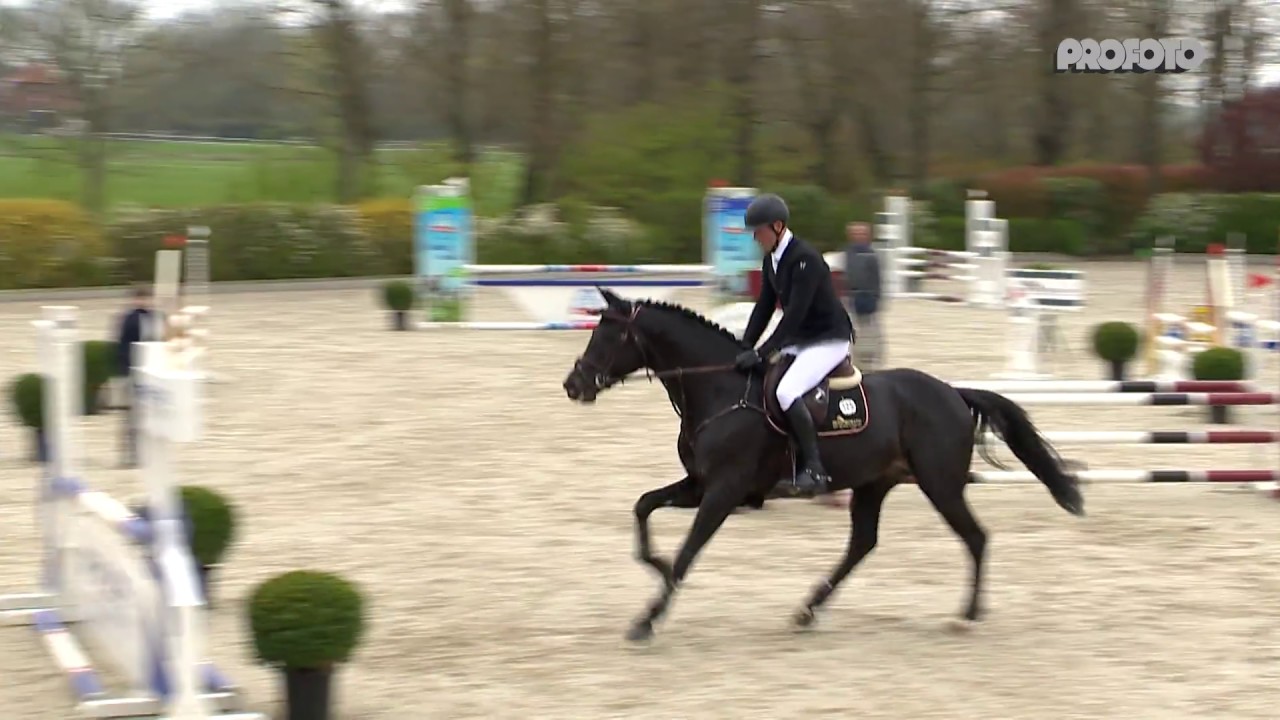 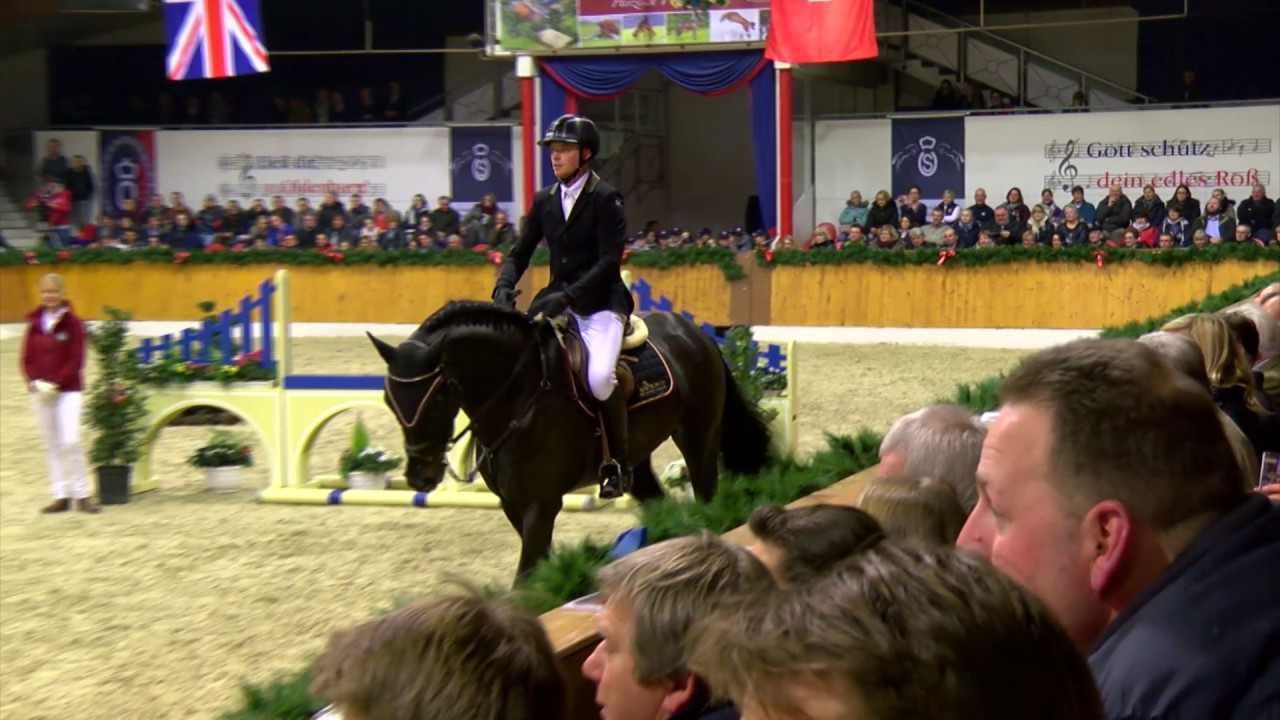 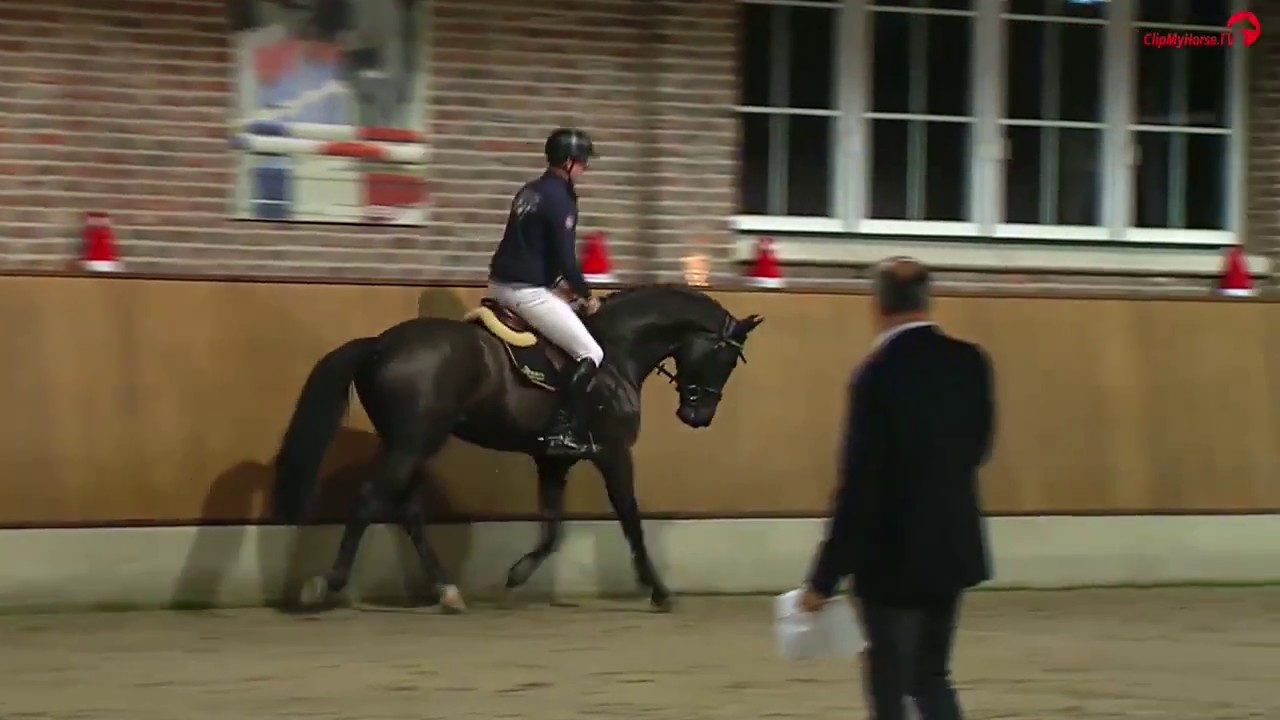 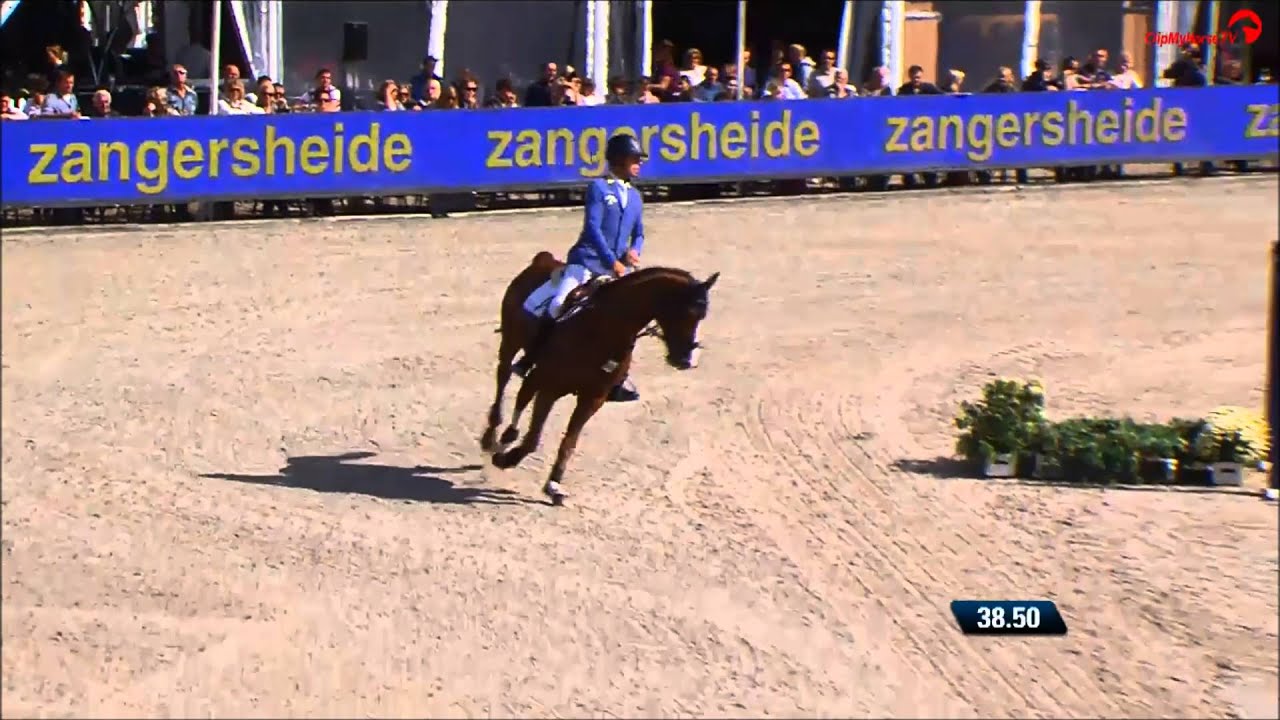 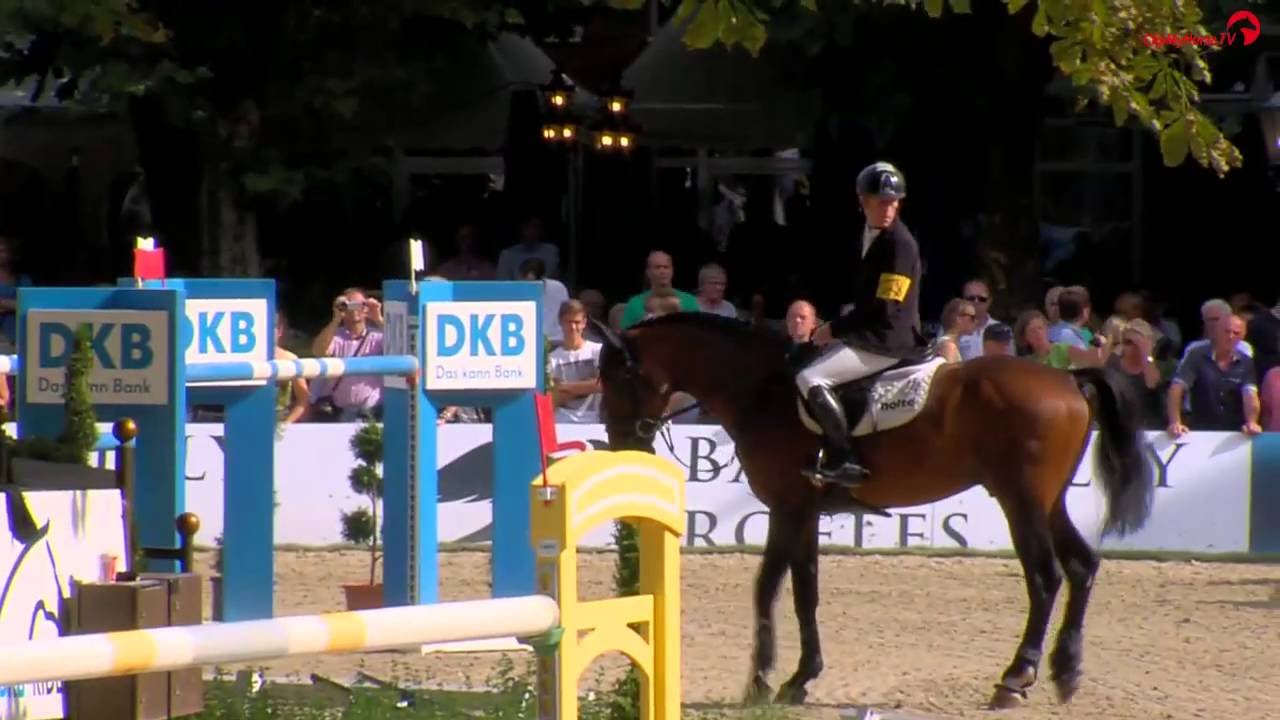 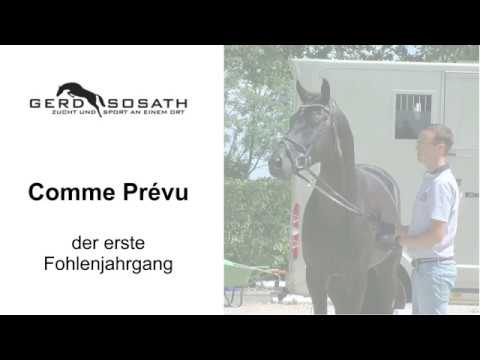 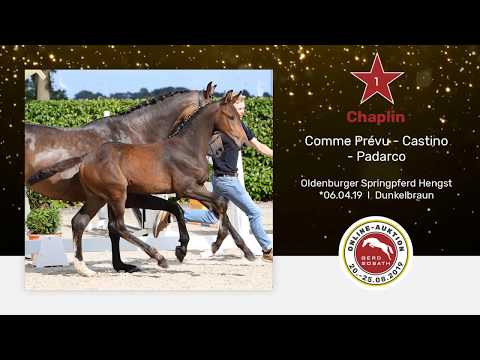 The first crop of the Westphalian premium stallion Comme Prévu by Comme il faut inspired the jumping breeders. The Oldenburg breeding director, Dr. Wolfgang Schulze-Schleppinghoff, described the foals as very attractive types, who moved very well through the body and had a good carrying moment. Comme Prévu's inheritance was a great example for modern jumping horse breeding, he summarized.

Number 68 was selected as the best first foal by Comme Prévu. The colt out of Lady Heida II by Landor S x Contender was bred by us and is a brother of the successful sport horses Cador, Cadora, Lady Cadora OLD and Diamant de Landor.

Number 62, a colt by Comme Prévu out of Heidedank by Lordanos x Landadel became runner-up. This foal is also bred by us.

Number 59, a colt by Comme Prévu out of a dam by Chatender x Calando, was placed on the third position. The foal was bred by Martin Simonsmeyer from Kalletal.

At the first Sosath online auction in 2019, his son Chaplin (No. 1) out of Castagnetta by Castino x Padarco van het Hertsfeld (Breeder: Manuela Lachnit, Nienburg) was the most expensive jumping foal.

Colestus“ by Comme Prévu out of Atlanta M by Numero Uno x Carbido won the Styrian Foal Championships in Oisnitz (Austria) with a score of 9.0. Breeder of the foal is Michael Haas from Klöch/Styria.

In 2020 his son out of Cassandra by Cador x Lordanos bred by Finn Tomforde from Kutenholz was approved for ZfdP.