Cyber convinces with his outstanding rideability and his great manner over the fences.
In 2019 Cyber became reserve champion of the Finnish licensing.

Sire Calido has already become a foundation sire. He produced more than 90 licensed stallions and more than 300 of his offspring are successful in the big jumping classes such as the international sport horses Coupe de Coeur (1.60 m) with Ludger Beerbaum, Cashmoaker (1.60 m) with Denis Nielsen, Coolmann (1.55 m) with Tobias Meyer, Calanda (1.50 m) with Marcus Ehning, the full-siblings Crazy Chara and Crazy Cato (1.50 m) with Friso Bormann and many more.

Dam, Salomee, who is called Cantara in the sport, participated in the Elite Broodmare show at Rastede and is internationally successful.

Dam sire Canturo is himself a finalist of the Bundeschampionat and successful in 1.50 courses and has also produced more than 40 other licensed stallions. His offspring, like Christy (1.60 m) with Marcus Ehning compete in the big competitions around the world.

Before becoming a broodmare, his great-granddam Landora won multiple show jumping competitions herself and produced both licensed stallions Casino Berlin and Casirus. Landora's dam Carola is the full sister of the internationally successful horse Carlos who competed at top levels and their half-sister Jackie Brown is placed in 1.60 m classes with Meredith Michaels-Beerbaum as just 8-year-old. Great-grandsire Sandro Boy was internationally successful with Marcus Ehning and won over 1.2 million Euro. He won the World Cup final at Kuala Lumpur as well as the Grand Prix of Frankfurt and was second in the Riders-Tour evaluation in 2010.

Also from this line is the 1999 and 2000 European reserve Champion of the Young Rider, Angelique (by Zeus), ridden by Mario Stevens. Other successful ancestors of the family include Banda de Hus by Argentinus, who was successful in international show jumping (Kevin Staut), Blueberry Hill by Barley Hill xx (1993 with Bettina Overesch, today Hoy, national champion of the eventing horses and then triumphant in classes up to Prix St. Georg), Rubinrot by Rubinstein (2002 bronze medalist at the World Championships for Young Dressage Horses and 2003 winner of the Swedish Championships, then successfully competing up to the advanced test).

More S-successful jumping horses from this line are Conners, by Corlando, as well as Bianco and Zarin, both by Zeus. Among the jumping sensations of this line are a number of successful dressage horses, including Wellcome by Worldman, Indonese and Indra M, both by Inshallah AA.

Furthermore, there are numerous licensed stallions from this line, including Casino Berlin, Casirus by Casiro, Welttraum by Weltmeister, Welt Stern by Welt As, Insider by Inschallah AA, Freischütz by Furioso II, Rosenstar S by Rubinstein, Mortimer by More Magic xx, Carlo by Chronist, Quidam's As by Quidam's Rubin and Conners by Corlando. 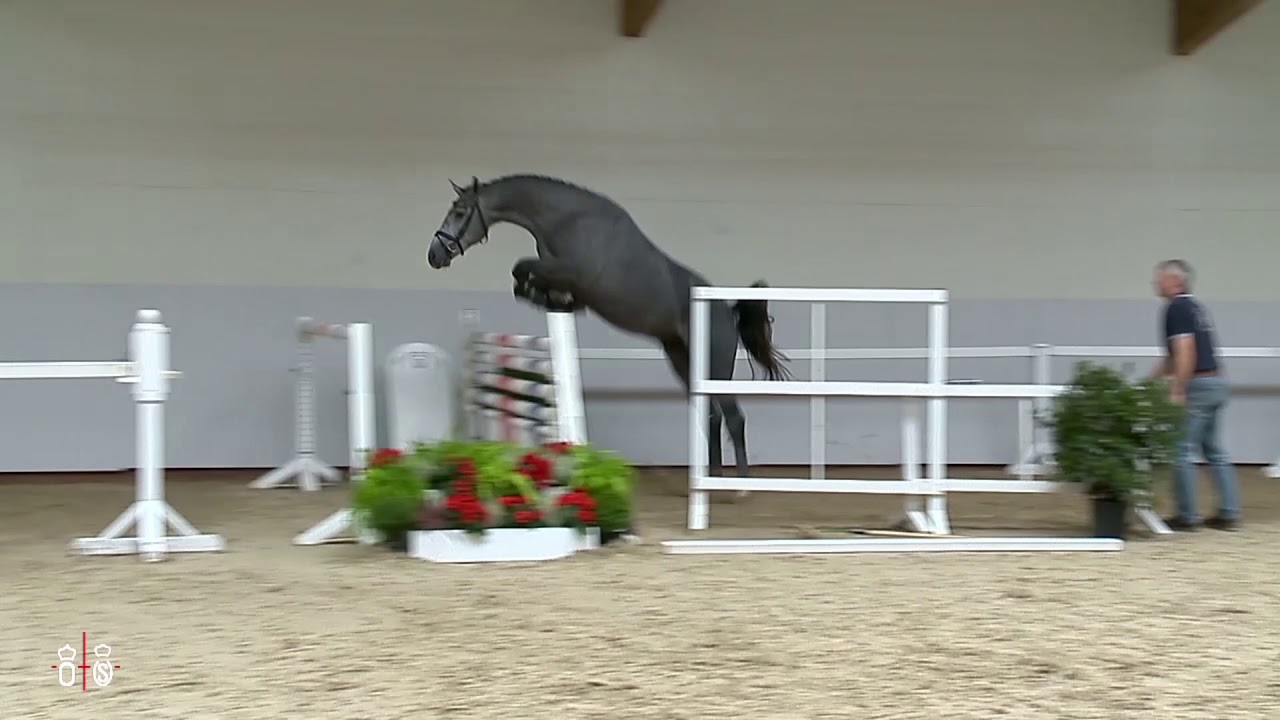 Cyber free-jumping as a three-year-old.